So Ends the Honeymoon 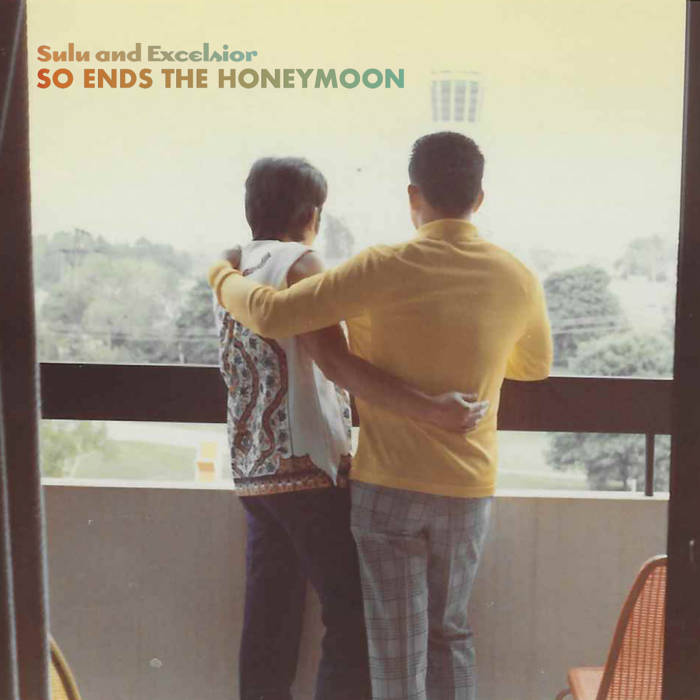 "Throughout the album, there’s an abundance of sounds moving from one side of the spectrum to another but it’s not difficult to focus from point A to point B. The Antimatter Suite was what I once thought, the pinnacle of Sulu and Excelsior’s capabilities. I never thought the band was going to be able to outdo its last album. It’s one of those moments when you’re happy to be proven wrong.

Referring back to “Galaxy Girl” again and again isn’t difficult to do. This is where it seems Sulu and Excelsior show off its intergalactic dance moves. Its bass groove attached to a xylophone with just a few notes overlayed is magical. Mallorca’s dual vocals, one filtered with vocal effects is literally dope AF. This leads us into the sprawling pazazz of the jazzed-up “Penny For You,” as the scratching upends it all as it’s capitalized by Mallorca’s flow. Piano, drums, and horns play an integral role as neither one overpowers one another. But it’s the title track that’s surprising here. A soulful vocal delivery over Ska-like guitar moves doesn’t go unnoticed. A lovely song? A perfect melody juxtaposed against fading love lyricism.

The musical palette under the Sulu and Excelsior umbrella seems to reach far and wide, and within the stormy “Harder To Hear,” the punctuation on the song’s rhythm adds a poignancy to it. It’s a 70s summer breeze filled with an unexpected guitar play that adds wonder. If that’s not all though, throughout “Wait For You I Can’t” we can figure out Sulu and Excelsior isn’t averse to utilizing Latin rhythms, made obvious from the piano work but Mallorca compliments it with the harmonies filling the hook and chorus. If there was ever a “WTF” moment, this just might be it. By the time we reach the album’s closer “Relativity,” you might begin to wonder if this is meant to be one of Sulu and Excelsior’s greatest moments, much like “Mercy Mercy Me” or “What’s Going On” was for Marvin. The song seems to surpass time & space. It’s also the allure of the toddler’s voice somewhere in the background singing on the chorus. Whatever it was that knocked Mallorca to the ground, wasn’t a knockout blow. He’s picked himself right up to begin where The Antimatter Suite left off, pushing the boundaries for Sulu and Excelsior. In actuality, with So Ends The Honeymoon, it doesn’t seem like there are any boundaries at all.
- Ghettoblaster Magazine


"With a groovy flow which shall transport your spirit into a timeless world... a jovial effort which shall get all bodies on that dance floor. Soaked in so much vibrant energy and a heartfelt message for the youth to learn from, this is a genuinely incredible release....Never letting go of the moment has never been more vital in modern day society."
- A&R Factory

"Playful and very melodic jazz song. Piano themes are creating some wonderful themes and harmonies in the background, as well as the rhythmic layering. Vocals are great, specially the background ones within the chorus parts."
- Nagamag

"All good when the hooks take hold.(Sulu and Excelsior) has no shortage of these - his possibilities of incorporating these into widely influenced arrangements are seemingly limitless."
- Sonic Soul Reviews


"the intricate and introspective raps of Sulu and Excelsior... deserve props"
Speed on the Beat

Produced, arranged, and composed by
Sulu aka Steven E. Mallorca

All instruments and vocals performed by
Sulu aka Steven E. Mallorca

Featured Performances
Vocals by Sean Adams & Un-G Wasmabati on "Paper Chase"
Bass guitar by Joel Bernardo on "Get Up Out" and "Your Reverie"
Electric guitar by Adam Charity on "Harder To Hear” and ‘Your Reverie”
Tenor Sax by Sam “Hotel” Podell on “Get Up Out” and “Button Up”
Scratches by Masaki Yamagata on "Penny For You"
Background Vocals by Cindy T. Mallorca on“Galaxy Girl” and “Paper Chase”
Background Vocals by Jasper & Spencer Mallorca on “Paper Chase”